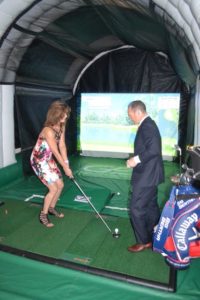 At the Wells Fargo on 18, did you see those two great putts Jason Day and Aaron Wise made on 18?  Watch them putt and you will learn something.

And, YES, you can learn how to putt in a golf simulator.  You might say, “the putts are all straight and just too easy,” and that was true until you tried my new putting drill.

Set a hole or “goal” (could be a coffee cup, coaster, or anything about 4 inches in diameter and round in your golf simulator or your home carpet.  Set up for a four foot putt.  BUT, put another ball directly in line with the hole about 8 inches in front of the ball you will putt.  NOW, try to make the forward ball go in the cup or hit the coffee cup or go over the coaster.  This is called the Rubenstein Putting Drill

Improving the way you line up putts: You should line up the ball you want to go into the hole (front ball) exactly in line with the hole if it is a straight putt.  To do this you must walk behind the “cue” ball (just the way you should line up a putt) to make sure you have the two balls lined up exactly at the hole. This will help you improve your ability to line up your putts on the course.  Also, if it looks perfectly lined up when you are behind the ball, but does not look lined up correctly when you stand over this putt, this might identify a bias in your eyesight to one side of the other caused by having a dominant eye or having one eye see much better than the other (as in my case, when the ball looks lined up perfectly from behind, when I stand over it, it looks like it is lined up to the left of the hole since I only see out of my left eye.  Thus, knowing this “bias” in my alignment, suggests I need to make an adjustment in my lining up my putts and be willing to aim a little “left” of where I normall aim. 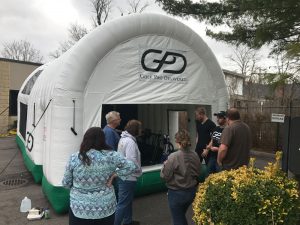