Lou Riccio’s Predictions for the US Open

The US Open is both the easiest and the hardest to predict. Easiest because the winner usually (not always) is one of the top players in the game. Hardest because the course is the hardest (some say too hard) and therefore there is an added dimension of randomness to the scoring. Also there is little if any historical play on the course so there is no data for a majority of golfers for this course, an important part of predicting.

So, not surprisingly the Model’s ten picks are all stars. They fall into three categories. First, the Model lumps Spieth and Dustin Johnson as the clear favorites with Stenson right behind. DJ has the edge on Jordan due to recent play, but that hasn’t always been a strong predictor. Longer term data tends to be better. And Spieth’s recent putting woes may not be adequately reflected in the data.
After them, there a drop in winning percentage. The second group includes Day, Thomas, Fowler, Rose and McIlroy. All but Fowler have majors under their belts already, including a couple of US Open champs.
After them, there is a long list of excellent players with a better than average chance. Interestingly Bubba’s name pops up. If he can keep it in the fairway, he just might add this to his two Green Jackets.
To complete the Model’s ten, Rahm, Matsuyama and Leishman have virtually identical chances. Although Leishman may not have the big name, but he just might have the big game for this course.
Who’s not in the top ten? The second ten is full of great players: Casey, Koepka, Michelson, Kuchar and Scott. My guess is they will all play well but not be in the hunt on Sunday.
How about Tiger? The Model is not generous to Tiger this week. Although it gives him a 70% chance of making the cut, his winning probability is essentially zero and his top ten is less than 10%.

And, we at Golf Pro Delivered ask, “What about Keegan Bradley?  Our hometown, Long Island golfer. We shall see, but expect one great round from him, and hopefully it will follow a good round or be his opening round. 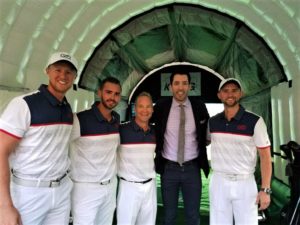